Universal and Blumhouse’s “Halloween Kills” topped the weekend box office with a $50.3 million debut. That’s a bloody good showing considering that the film is being release simultaneously in theaters and on-demand via Peacock, NBCUniversal’s in-house Netflix challenger. That kind of distribution pattern has depressed ticket sales in recent months, with films like Warner Bros.’ “Cry Macho” and “The Suicide Squad” failing to resonate with moviegoers when they were made available at the same time on HBO Max. 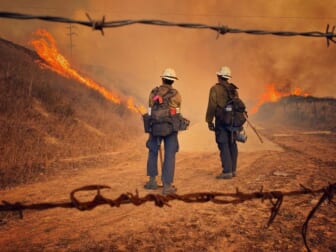 An exclusive theatrical release wasn’t enough to save “The Last Duel,” a lavish historical epic starring Adam Driver, Jodie Comer and, venturing very far afield from the Cambridge/Southie milieu that made them stars in “Good Will Hunting,” Matt Damon and Ben Affleck. The drama, which is set in 14th century France, bombed, grossing a pallid $4.8 million. That’s a disastrous result given that the film cost north of $100 million and a sign that older audiences remain skittish about returning to theaters when COVID and its variants are still circulating. The film was inherited by Walt Disney after it bought 20th Century Fox Studios in 2019. Ridley Scott, who also oversaw this fall’s “House of Gucci,” directed. Critics were kind, but that couldn’t save the movie, which is limping to a fifth-place finish.

Elsewhere, MGM, United Artists Releasing and Eon Productions’ “No Time to Die” earned $24.3 million in its second weekend of release, good enough for a second-place finish. That’s a drop of 56%, which is roughly in line with how other James Bond films have performed in their sophomore frame. It brings the film’s domestic haul to $99.5 million, a respected result in pandemic times. However, the problem for the 007 sequel is that it was greenlit in pre-COVID times and carries a massive $250 million price tag along with more than $100 million in promotional spending. Given those costs, “No Time to Die” will have trouble turning a profit during its theatrical run.

Sony’s “Venom Let The Be Carnage” slides in at third place, capturing $16.5 million in its web. That brings its domestic haul to $169.1 million, an impressive figure that guarantees audiences haven’t seen the last of this symbiote. UAR and MGM’s “The Addams Family 2” nabbed fourth place with $7.2 million, pushing its domestic gross to $42.3 million. Also Read:
“There will be things that people can’t get,” at Christmas, White House warns

“Halloween Kills” revives the un-killable Michael Myers (last seen incinerating in a house) and brings back franchise star Jamie Lee Curtis. David Gordon Green, who orchestrated the carnage in the 2018 reboot, returns as director. They’ll all be back for more bloodletting with 2022 “Halloween Ends.” Given that this is a film series that dates back to 1978, that title is likely a misnomer.