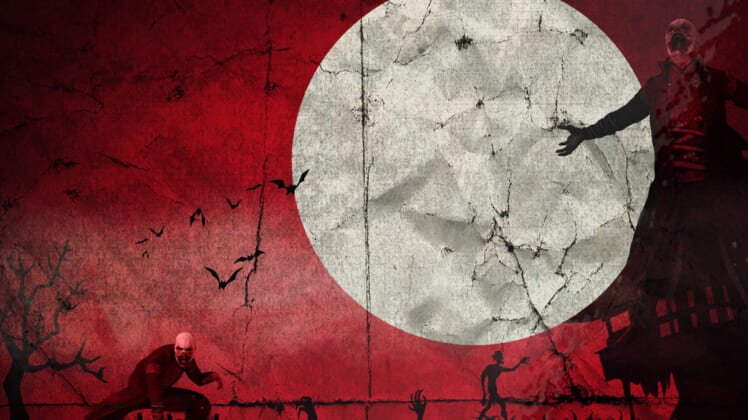 If your kids are borderline adults, they’ll be looking for big scares when watching movies. So why not treat them to one of these PG-13 horror movies for a terrifying night in.

We’ve included trailers for each suggested movie so you can decide if it looks too much for your teen. Plus, we’ve added where the movie can be streamed.

Scary Stories To Tell In The Dark is based on the children’s book series, and is arguably one of the more family-friendly PG-13 horror movies on this list. However, be warned, the movie is scarier than the books. Many scenes take the book’s illustrations to horrifying new levels.

The movie is about a group of friends who find the tomb of a young girl whose tormented life became a set of scary stories. Those stories in turn become real-life for these unlucky friends.

If you’re looking for a modern movie that’s blood-free, then Scary Stories To Tell In The Dark might be for you. IMDb gave the movie a rating of 6.2 out of 10.

CHECK OUT: 40 of the best family vacation movies to watch this weekend

From the director of Shazam!, Lights Out is a PG-13 horror movie that uses light to tell a visually engrossing tale that will terrify any teen who was once scared of the dark.

The movie is about a mother who talks to herself at night. Throughout this ghostly tale, the truth about who she is talking to comes to light, as her children wrestle with the truth.

This movie is the perfect PG-13 ice-breaker for teens. Lights Out earned a 6.3 out of 10 from reviewers on IMDb.

In the ilk of Scream, Friday the 13th, and other horror slasher movies, The Final Girls is a modern take that flips archetypes and stereotypes on their heads.

The movie premise is unique, with a group of friends passing through the screen of an 80s slasher horror. While on the other side, these teens know how slasher movies unfold as they come face-to-face with the masked murderer.

The Final Girls is both a comedy and horror, including touching moments of friendship while being a true homage to the genre. This movie earned a 6.5 out of 10 on IMDb.

CHECK OUT: Amazing time travel movies that you should watch right away

Don’t let the fact this movie was directed by the same person as gore-fest Saw put you off (James Wan). However, Insidious is definitely a PG-13 horror movie pushing the limits of the rating.

The movie is about a child in a coma, whose parents are simultaneously battling against a haunted house. With massive suspense coming in waves of evil spirits building into a crescendo where the real cause of the evil is revealed.

If you’re looking for a movie for slightly older teens, then Insidious is perfect for a scary movie night. Insidious earned a 6.8 out of 10 from reviewers on IMDb.

Another horror movie that pushes the PG-13 rating to its extreme is Drag Me to Hell. A movie made by The Evil Dead creator Sam Raimi.

This Scream Award-winning Best Horror (2009) is about a bank loan officer who refuses an elderly woman a loan. In retaliation, she curses the loan officer, and what follows is an unmissable horror that’s not suitable for kids 12-and-younger.

Out of all the movies on this list, this is the most graphic, so parents be warned. Drag Me to Hell earned a 6.6 out of 10 from reviewers on IMDb.

Based on the terrifying Japanese movie Ringu, The Ring remains one of the scariest PG-13 horror movies to date — even though it was made almost two decades ago.

This movie is about a haunted videotape that curses the viewer. The curse involves a ghostly woman, whose long hair covers her face. In some terrifying scenes, she climbs from a well, through TV screens, and terrifies her victim to death.

The Ring became a pop-culture movie in the early 2000s and is the second-highest IMDb TV rating on this list, at 7.1 out of 10.

CHECK OUT: The best rainy day movies and where to watch them

The Others is the highest rated PG-13 horror movie on this list, with an IMDb rating of 7.6 out of 10.

What you need to know about The Others is this, it will mess with your mind. In 2001 this movie flipped the classic haunted house genre. Retaining the genre’s tension and jump scares, but delivering them differently from the norm.

Rest assured, when it comes to a fright-night movie, The Others is second to none. So, if you’re looking for a ghostly movie that’s PG-13 friendly, and something that will leave you and your family surprised, this is the movie for you.

For parents unsure of what PG-13 actually represents in a movie, here’s an answer:

What does the PG-13 rating mean?

The rating PG-13 is a strong caution to parents. Highlighting that some material in the movie might be inappropriate for people under the age of 13. Content may include stronger language, extended scenes of violence, sexual situations, and drug usage. For more ratings click here.